When it rains, it pours

A great smattering of stuff about A Common Pornography lately. Like…

A sweet review on Blog Critics!

The cover of The Portland Mercury! (they excerpted a part of the book) (I had no idea they were going to put my name right on the cover, but that’s cool) 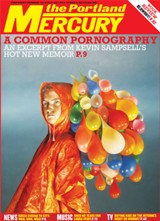 I had some dirty haiku published in this magazine (NSFW!) under a pen name. (Note: I know this is cheesy, but a good friend was an editor there until recently) (Yes, they edit) (Yes, you’ll have to buy the issue to see the haiku)

And on top of that stuff, I also have a new story up on this weird e-book thing. It’s a little ditty about Mary Gaitskill and her cupcakes. Please Note: It is fiction! She did not really live in Portland and hang out at open mics!

Awkwardness alert: I am hosting Mary Gaitskill at Powell’s later this spring! And yes–she is one of my favorite authors.