On the Hunger for Reality

Tonight at 7:30pm, I’ll be hosting and introducing David Shields at Powell’s. I just finished reading his “manifesto” Reality Hunger. It’s a book that has been pretty divisive among readers. In it, Shields basically illustrates why current fiction, especially novels, are dead to him. Or at least bore him. The assembled quotes and anecdotes (over 600 of them) are mounted as evidence/justification for his position. Most are by other people, which means that Shields himself probably wrote less than a quarter of it. That was initially my problem with the book. But as I got further into it I stopped thumbing to the back of the book to see who wrote what part, and I simply let most of the book come to me without a concern for who said it (Shields begrudgingly includes a list of his sources at the end to ease Random House’s worries). Even though Shields didn’t write the majority of the book, I began to admire it as a pure creation of its own. I’m sure Shields could have easily taken some of the thoughts from Picasso, Emerson, and Robbe-Grillet and manipulated them into his own. After all, old philosophies, stunts, and theories have been remade by lesser men and women (like Lady GaGa doing Madonna on a karaoke machine as big as the world).

So I ended up really enjoying Reality Hunger. As the author of a memoir, I found a lot of sections to match up with my thoughts exactly. And not that I’m “switching teams” (nonfiction vs fiction) but I must admit that I’ve become more interested in memoir the past two years. With some exceptions (Wells Tower, Donald Ray Pollack, Sam Lipsyte, Dawn Raffel), I’ve found it hard to get inspired by, or to connect with, a lot of current fiction.

I think what upsets most people about Reality Hunger is they feel that Shields is speaking for them or for (American) culture at large. And maybe he does dare to do that sometimes, but I think that’s a calculated form of confrontation. In a way, it’s like someone telling you that you really didn’t really like The Kite Runner or Tree of Smoke. It’s kind of funny, actually (confrontation has really come into its own as a form of humor, especially relevant in the past 30 years).

When I started reading Reality Hunger I immediately thought: I should send him a copy of A Common Pornography. I could tell the way he talked about collage and narrative fragments that he would like ACP. But I was also a little unsure about that because of one past incident. In 2004, when I was putting together the anthology, The Insomniac Reader, I asked Shields if he had something to submit to me. I’d read some of his stories and his great book on race and basketball (Black Planet) and really enjoyed his work. He sent me a story that I really liked and I initially accepted it. But when I started shopping the finished collection around, I realized that it was too long. I had to cut some stories out. His was one of them. I remember he sent me an email that was exasperated and maybe a little bitter. But who could blame him.

Anyway, before I could send him a copy of my book, I got an email from him last month telling me how much he “admired” ACP. He said he really liked the “loose” but “rigorous” form. That made my day, especially the fact that he found my book on his own and that he wasn’t mad about the Insomniac snafu.

So tonight I will be more than happy to reconnect with Mr. Shields. He’s discussing something that is deeply valuable to our culture and if he is dividing listeners into two camps, I find myself leaning more toward his side. At least until I discover the next great novel, hopefully lurking out there somewhere. 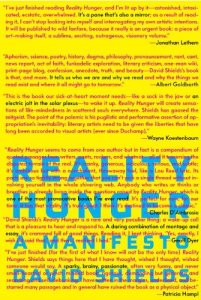 One response to “On the Hunger for Reality”