So, gosh. I was just looking through my files for a particular story and I came across this interview I did with Mark Oliver Everett about three whole years ago. Although he’s mainly known for his musical endeavors as the rock band, Eels, he’s also the author of a really great memoir, Things the Grandchildren Should Know.

This interview was done for the Portland Mercury, but it was shortened for print. Here’s the slightly longer version. 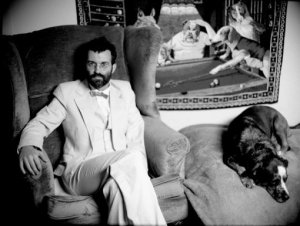 Mark Oliver Everett has released a bunch of critically acclaimed albums with his band, Eels. I don’t really know much about his band and I’ve never been that interested to tell you the truth. I always thought they were just some one-hit wonder (“Novacaine For the Soul”) ready to die off any second.

But hey—I’m wrong. After reading Everett’s memoir, Things The Grandchildren Should Know, I sort of have a man-crush on the guy. Not only does the book convincingly depict an awkward childhood and his adult struggles to become the artist he is today, but it also has a staggering death toll. It starts when Everett’s famous physicist dad, Hugh, dies without warning (learn more about Hugh’s legacy by searching “Parallel Universes, Parallel Lives” on Youtube). Shortly after that, his sister commits suicide, his mom passes away, bandmates die, neighbors die. The guy may as well become a funeral director. But somehow Everett has written an inspiring and funny personal history.

And it turns out that Eels are a pretty interesting band with a devout following. Who knew?

Was there a certain event that compelled you to write this book?

My friend Anthony, who I grew up with and has been around for all of it, periodically would tell me that my life would make an interesting book, but I never took the idea seriously. Then I finished an EELS tour that had a 7-piece band and suddenly the idea of doing something by myself appealed to me. I naively thought that writing a book by myself every day would be easier than worrying about the day to day dealings of a 7-piece band on the road. It turns out that writing a book is one of the hardest things you can do.

Harder than making an album?

Yes. Every time I branch out and try something other than music, I always come running back to music with my tail between my legs. Writing a book was the hardest project I’ve ever worked on, and I don’t recommend it. But I had to do it. I had to tell the story once I realized that it could maybe be inspirational for some clueless kid to see that this clueless kid made it through OK.

Were there any books that inspired you?

Yes, just one. Ray Charles’ autobiography, Brother Ray. I read it when I was a teenager and it made a huge impact on me, mostly because it felt like he was sitting there with you, telling you his story in a very straightforward, unpretentious way. I’m not a fan of flowery writing.

Do you think the book would have been much different if you would have filmed the BBC special about your dad before you started writing?

Yes. I would have known a lot more about my father, but I think it’s good that I didn’t know much about him when I wrote the book because it’s an accurate reflection of what it was like in my house at the time. He was a mystery.

You have one chapter about your Russian ex-wife, Anna in your book, but it was obviously a long and important part of your life. Do you think you’ll explore those years more in your next memoir? Will there be a next memoir?

Indeed, I could write a whole other book just about that part of my life, and maybe I will someday, but I’m not in a hurry to write any more books. I would like to do a sequel in forty years that is the most boring book anyone has ever read — because I can’t take any more drama!

Do you go to certain bookstores while you’re on tour? What sort of reading material would one find on an Eels tour bus?