A couple of my favorite writers died recently, as well as a good friend. All of these guys were amazing, ornery, tough-as-hell survivors.

Harry Crews was one of my first favorite southern writers. And lucky for me he had a lot of books to read when I discovered him in the early 90s. In fact, many of his books were already out-of-print and hard to find. For years after, it was a habit for me to always look in the C aisle of any used book store I entered. I was able to eventually collect nearly all of his books, even cheesy little mass market versions of Karate is a Thing of the Spirit and The Hawk Is Dying. My favorite books of his are A Feast of Snakes, Body, and the memoir, A Childhood (an amazing and touching book).

As a writer, I was inspired by his fearlessness and dark, sometimes brutal, humor. I also think it was Crews who said the thing about writing just one page a day and how that would equal 365 pages a year. Enough for a novel, even if you chopped off 100 pages! He also brought to my attention, the no-nonsense advice: Wish in one hand and shit in the other and see which one fills up first.

Harry was sort of forgotten in his last dozen or so years but apparently there’s another memoir that will hopefully find its way into the world soon. Here’s a great NYT tribute. 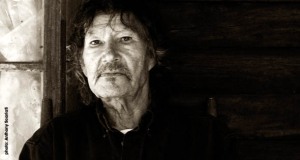 I liked William Gay because he was a late bloomer and didn’t even publish anything until he was about 57. His backwoods stories reminded me of Erskine Caldwell and his dark style brought to mind Cormac McCarthy.

Once, when I was in Oxford, Mississippi for a book conference, I was walking around the Ole Miss campus and I saw him walking through the parking lot. I wanted to run over and say hello to him but I was kind of scared of him.

My favorite book of his is the story collection, I Hate To See That Evening Sun Go Down. Here’s a nice tribute to him.

Marty ran the small press section at Powell’s before I took it over. But I was friends before we worked together. He was a fixture at the poetry slams back when they first started. He designed a book cover for me once (for Richard Meltzer’s chapbook, Holes). He published a weird story of mine in his food/cooking zine, Cooking Rock. He read his own writing at a reading series I hosted at the legendary Umbra Penumbra Cafe. He supported Future Tense books like a champ.

Yesterday, I spoke at his memorial, which was held at Mississippi Studios for a packed-in army of friends and family. Here’s what I wrote for the occasion…

Marty told me to apply to be a holiday cashier at the Beaverton Powell’s in late 1997 and to tell the store manager that he had sent me. I feel like that manager must have trusted Marty pretty well because I was hired on the spot. For the next several years, I tried to make good on that trust by being a great and enthusiastic bookseller like he was. Marty’s instincts were good in this way. He could spot commitment and enthusiasm in people. He could tell if you were a bullshitter or a real talent. He put his heart into the people he trusted, and when someone does that, it usually makes those people better. Marty made people better.

Marty was also like a magnet. A crazy, long-haired boisterous magnet for freaks and misfits and poets and passionate people of all stripes, all ages. Whether he was running the merch table at the poetry slam or buying a stack of zines from you at Powell’s, people felt connected to him, taken care of, and most importantly, they felt welcome. Marty welcomed all who deserved it.

On the day Marty was fired from Powell’s, I had lunch with him. At lunch, he told me he had the sneaking suspicion that his time at the job was almost over. He made me promise that I would try to take over the small press section at the store if he was let go. Before he ran it, Vanessa Renwick ran it, and I always looked up to both of them. Later that day, he was fired and I remember as he was walking out, someone said over the intercom, “We love you, Marty.” And I think people knew what had happened because a few people started crying right then and there. It was like the end of an era. Obviously, he was treasured as a bookseller and as the guy who fulfilled many a zinester and chapbook-publishing person’s dreams, but maybe more importantly, he was the person who encouraged solidarity, fairness, and unity through his work with getting the Powell’s union off the ground. Marty Kruse was solidarity.

Marty was also a great father. I remember one day my son and I went to meet him and his son, Nick and we were going for a hike around Forest Park. Nick and my son Zach are about the same age. This was in 1997, before I even started working at Powell’s—I know this for sure because we went on this hike with my first wife on the day before we got married. As we were hiking along, I remember Marty just randomly saying to his son, “I love you, Nick.” When I say randomly I mean he said it for no real reason other than to just ANNOUNCE it. His son replied, “I love you, dad.”

And around this time, I too, of course, would tell my son I love him but maybe not as randomly as that. Not as freely as that. I let that display be a lesson to me. I watched and I learned and I absorbed it. I admired that freedom, those random acts and declarations of love. We walked through the woods and threw rocks in the river. We watched our kids pick out walking sticks. We gave them piggyback rides. We held their hands. We were two fathers out in the natural world talking about love out loud. It was unforgettable.

This entry was posted in Uncategorized and tagged Dudes I Love, Harry Crews, Marty Kruse, William Gay. Bookmark the permalink.

4 responses to “In Memoriam”