A Postcard From David Rakoff

Recently, I was cleaning up around my desk at Powell’s, where I have now worked for over sixteen years. As you can imagine, it can get pretty messy, especially the leaning towers of review copies, the piles of zine and chapbook submissions, and the various press releases from publishers. Sometimes I find some really cool artifacts though, like thank you notes from authors. Here’s one from the wonderful writer and sweet human, David Rakoff. Just over twelve years ago, I had hosted his reading at Powell’s and then–later the same night–had the pleasure of reading with him and a few others at a tiki bar by Portland State University. It was in support of a Chicago literary journal, Bridge Magazine that was run by Michael Workman and Greg Purcell (who also did a great website called No Slander). His reading that night was wryly funny yet warm and understated. He was the star of the night. 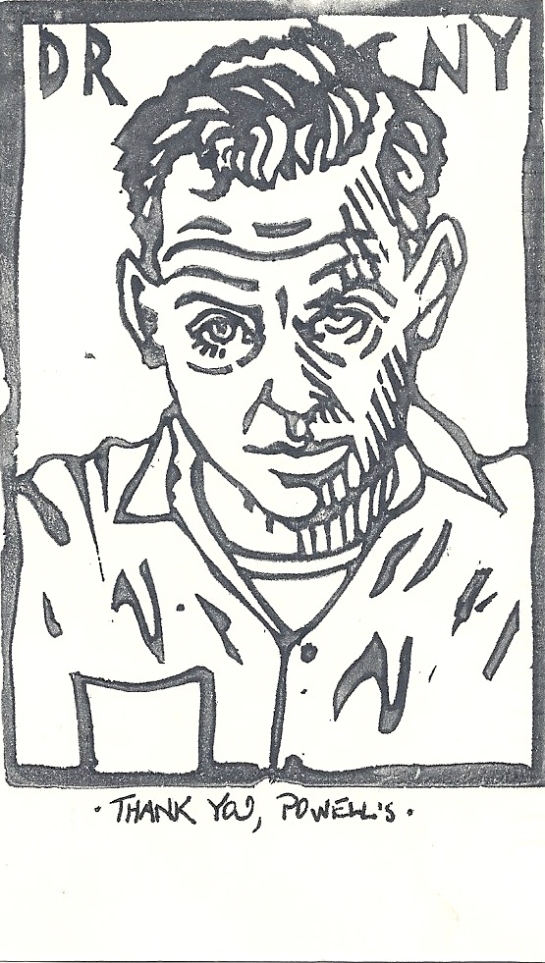 The postcard is also addressed to Dave Weich, who did numerous interviews and amazing things for Powell’s web site for many years.

I love having this postcard as a reminder of my very brief time with David and how kind he was. David was diagnosed with cancer in 2010, lost his left arm during treatment soon after, and then passed away on August 9th, 2012. He wrote about his arm in the final essay of his collection, Half Empty, and talked about it to NPR’s Terry Gross. He left us with many insightful, hilarious, and daring works of nonfiction. His swan song, Love, Dishonor, Marry, Die, Cherish, Perish, was a poignant novel-in-verse that came out last summer. He would have been fifty this year.