Summer is officially here and I’m planning on doing some fun stuff and getting a few important things done. Here’s a quick rundown.

Tomorrow night, I’ll be hosting a kick-ass outdoor reading at Colonel Summers Park. It starts at 7pm and the weather is supposed to get clear and nice by then so we’ll probably even get there early and play some basketball or frisbee or something. I’ll be introducing Eirean Bradley, Diana Salier, and Chloe Caldwell for their short readings and fellow Future Tense peeps Bryan Coffelt and Becca Yenser will also be there. Check out the details here. It was also a featured pick in the Mercury and Oregonian! 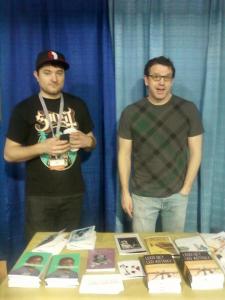 Bryan Coffelt and me, pimping some literature (from AWP 2012)

In July, I’m going to fly down to visit my brother in Houston and also read alongside some of the coolest ladies in America (I’m reading at the Houston and New Orleans stops on their tour). I love going to the south, so this should be a blast.

While I’m down there, I’m hoping to finally finish up some of the final edits and revisions of the novel I’ve been working on for twenty months (feels like twenty years). More updates on that as they come.

Summer reading? Well, right now I’m about to finish Ryan Boudinot’s Blueprints of the Afterlife, which is one of the weirdest and funniest books I’ve read in years. I also have the debut issue of Radio Silence that looks fantastic, Pauls Toutonghi’s new beauty, some more poetry by Sharon Olds and Matthew Dickman, the new novel by Padgett Powell, and that newish dirty Nicholson Baker book that I still haven’t gotten to. I like to do a lot of my reading on the Max train or at Bipartisan Cafe, where they have the best pie in Portland.

Summer literary happenings? I’ve set up a reading for Justin Maurer and Lindsey Kugler for Friday, July 27th at Ampersand that should be awesome. And then in August, I’m helping coordinate the Portland stop of the “Lil’ Bitch Tour” with Chelsea Martin, Elizabeth Ellen, and Scott McClanahan. That’s on August 17th, location TBA.

Summer movies? I saw Prometheus with my son a couple of days ago and it was pretty fun I thought. But most new movies have looked real crappy lately, so I’m not sure what else. Ruby Sparks could be a guilty pleasure. Maybe The Bourne Legacy too? I don’t know. Where are the slow, depressing dramas about fucked-up people when I want them?!

Summer songs? I hope to listen to Peggy Lee a lot. Mates of State always sounds good when the sun is out too (I hope to see their show in Portland on June 30th). That new Best Coast is also playing around here. 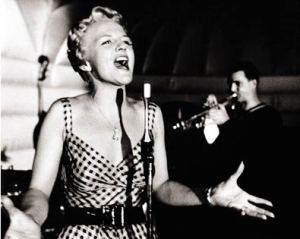 Also, I’m not a strong swimmer, but I may put some floaties on for this year’s Big Float. (Watch for the awesome promo videos coming soon–written and produced by B. Frayn Masters!)

That’s all for now. See you in the sun!